1.  My Button Accordions:  Single-Action and Diatonic. 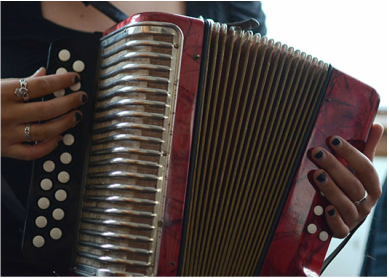 My accordions have twenty-one treble (right-hand) buttons, in two rows.  Except for its top button, each row is diatonic, that is, based on collections of seven notes.  For example, a row in the key of C will give the tones (or notes) C, D, E, F, G, A,and B.  With repeats at higher pitches, this covers just over two octaves.

For my accordions, each  treble note is produced by a pair of metal reeds.  The two reeds in each pair are tuned to slightly different frequencies to give the note a richer sound, most noticeable with higher pitches.

Each bass note on the left side is typically produced by two lower frequency reeds, tuned an octave apart.  My C bass-button, for example,  gives a superposition of the C and lower C tones.

Each chord on the left is typically produced simultaneously by three reeds.   For example, the C chord contains the notes C, E and G.   It so happens that these three tones sound great together; they are in harmony (or accord) with each other and thus they are said to form a major chord.

The bass and chord side of these accordions are also more similar than different.  Most bass buttons have one pair of reeds, typically tuned an octave apart, for the pull,  and another pair for the push.  The chord buttons typically have three (or more) reeds for each chord  on the push,  and another three (or more) reeds for the pull.
It's time to move on to our next challenge, which is to learn some fundamentals about the music you can play on the accordion.

NOTE 2 - Composers, Performers & Publishers:
Though not revenue generating, this non-profit educational site high-lights and celebrates some of my favorite composers, performers, and publishers, and encourages you to purchase their products, as I have done and continue to do, whether in paper, CD or electronic formats.
​
DISCLAIMER 1:  Browser Compatibility:
This site has been tested on the 2020 Chrome, Edge and Brave browsers without problem.  However my current (January 2021) Firefox browser does not always properly align the button notes with its corresponding lyrics.