Return to BA2-Unit 4
1.   Button Layout of Double-Row Accordions
As you hold the accordion to play, the treble buttons, providing the melody, are on your right, and the bass and chord buttons, which can enhance the rhythm and contribute to the tune's harmonic content, are on your left.  The treble buttons are usually numbered from 1 to 11 (outside row) and from 1 to 10 (inside row), where 1 is the button near the chin.

I prefer to label the left buttons, from from 1 at the top (near chin) to 4 at the bottom in each row, as follows:

The left-hand inner-row bass and chord buttons can add additional interest and variety, including the enhancement of harmonic content, when played in conjunction with certain treble notes. 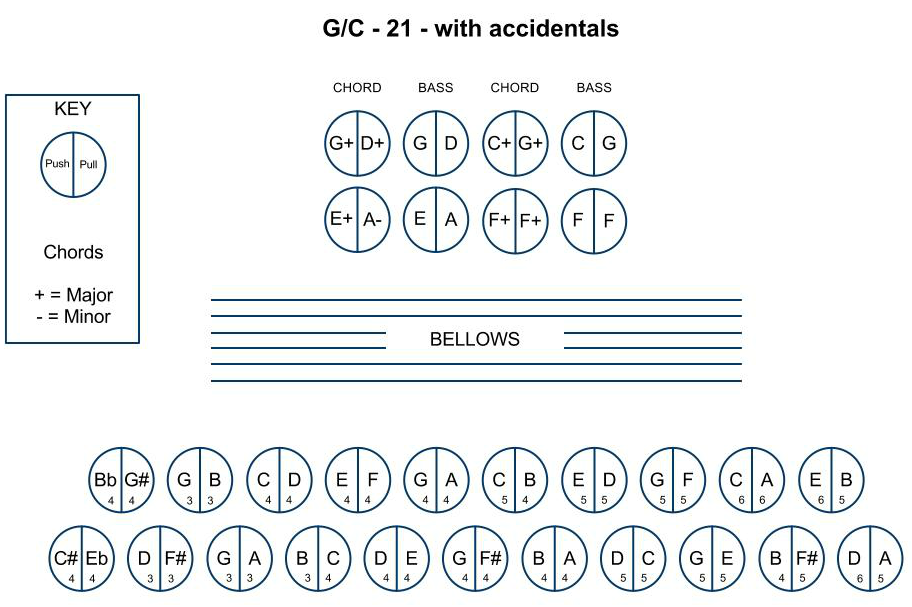 (If you find the following presentation too confusing, then just skip directly to CONCLUSIONS.)

There are other, less frequently used, chord possibilities.  For example, the left-hand chords on my accordions are all three-note chords (or triads), consisting of the first, third and fifth notes of their scale.  The discussion and conclusions above fail to take account of the fact that, in some cases, it is possible to form four-note chords by playing a left chord button, such as i3*, and a right treble button, such as o1*, to form a four-note chord, in this case an F7 (dominant) .  This increases the number of  possible harmonic matchings, though not by very many for double-row accordions.  Those of you with triple-row diatonic accordions will have more options of this type.

Some button accordions have a "stop" on the left, which gives the option of removing the "third" of a three-note chord, leaving only the "first" and the "fifth" notes.  It is the "third" that determines whether a chord is major or minor, and thus removing it gives a reduced "chord" that can be used for tunes that call for a number of minor chords.

NOTE 2 - Composers, Performers & Publishers:
Though not revenue generating, this non-profit educational site high-lights and celebrates some of my favorite composers, performers, and publishers, and encourages you to purchase their products, as I have done and continue to do, whether in paper, CD or electronic formats.
​
DISCLAIMER 1:  Browser Compatibility:
This site has been tested on the 2021 Chrome, Edge and Brave browsers without problem.  Your browser may or may not provide proper alignment for my accordion notation, requiring adjustments on your part.